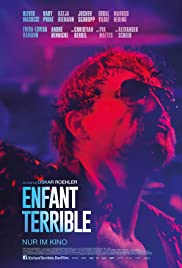 Noun: a person whose unconventional or controversial behavior or ideas shock, embarrass, or annoy others.

When a Man's Creative Genius and Demons Collide

A prolific writer, as shown by Fassbinder's 33 screen plays under his belt, having written 14 plays and made 44 films, all
before the age of forty-years. He also starred in many of his own film.

For all of his artistic gifts, he had just as many mean and sadistic ways, which where all on display in his screen plays and
his preferred form of acting. His insistance on the actors to not just act as in pain but to actually experience the pain of the characters.

Cinematographer, Carl-Friedrich Koschnick captures the nitty gritty world that Fassbinder that lives in with all of the darkness and shadows of the scenes.

ENFANT TERRIBLE, a filmmmaker who's two worlds are in constant conflict, which has you on edge waiting for the crash. Provides a look into the life
of a deeply damaged man.

Is a new-age North American distribution company, focused on bringing unique and targeted content to audiences across the country. We are committed to releasing auteur-driven, original cinema in the theatrical, digital and home video space. Our goal is to create original marketing campaigns directly catered to audiences who will embrace our brand of thought-provoking cinema. Dark Star also services distribution companies and producers in the theatrical, digital, and festival space.