Laila Ali, former undefeated boxing champion, Emmy winning television host of "Home Made Simple" on OWN, author of the book "Food for Life and celebrated cook is the Ambassdor for the 13th Annual Leimert Park Village Book Fair.

There was standing room only for Laila's honest and humorous Q&A  and her awesome, and I must say, delicious cooking demonstration.

To go along with her sold out book "Food for Life", the strong support for her and her brand extended to her sold out organic seasonings. 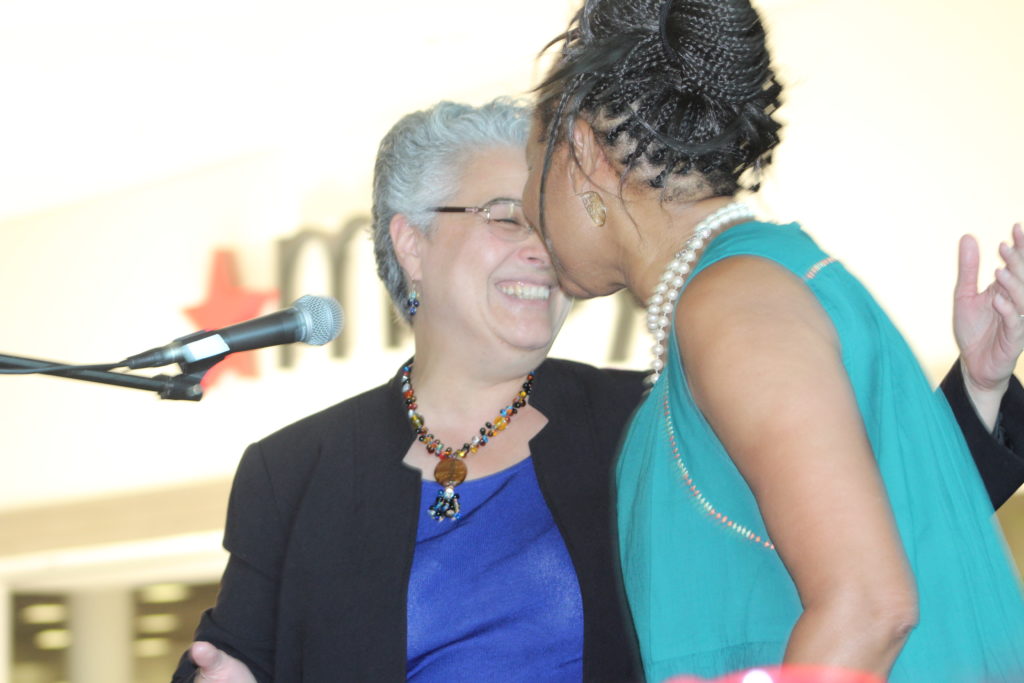 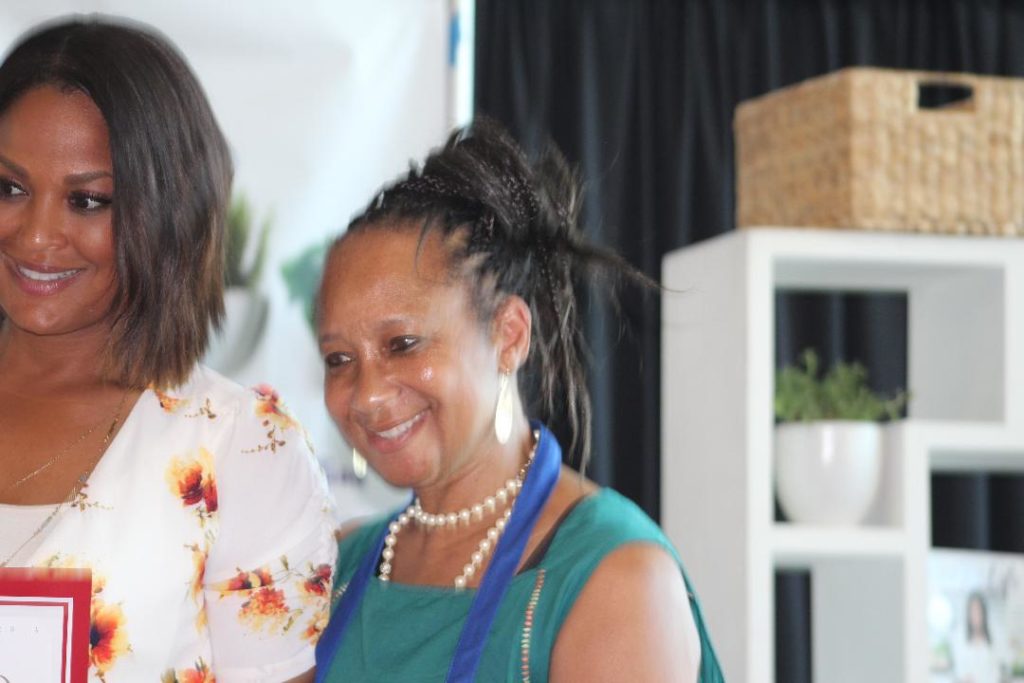 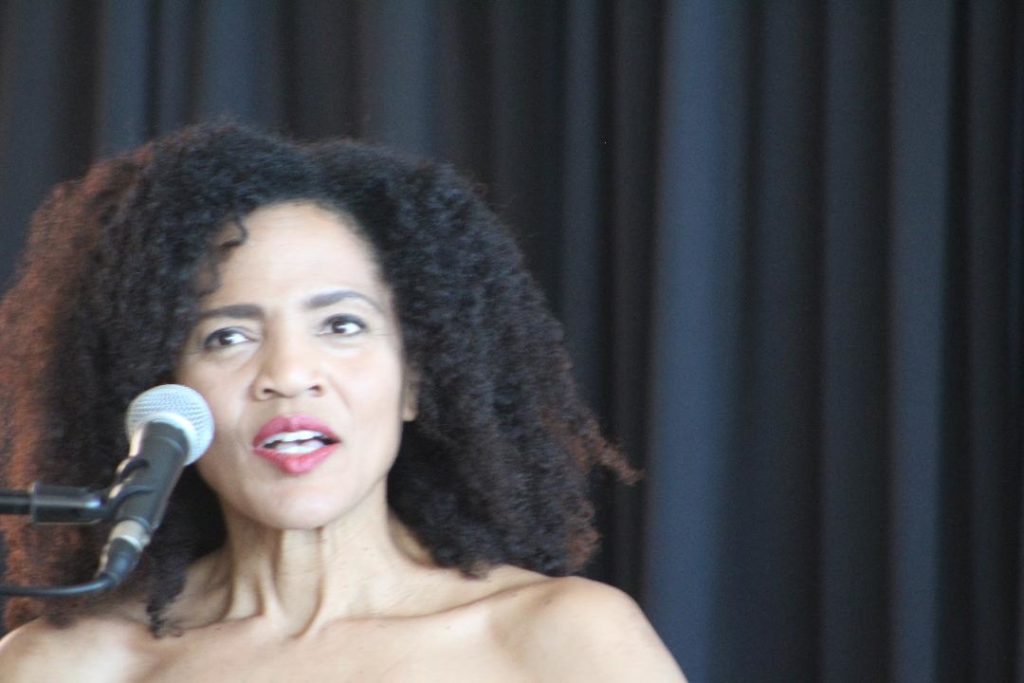 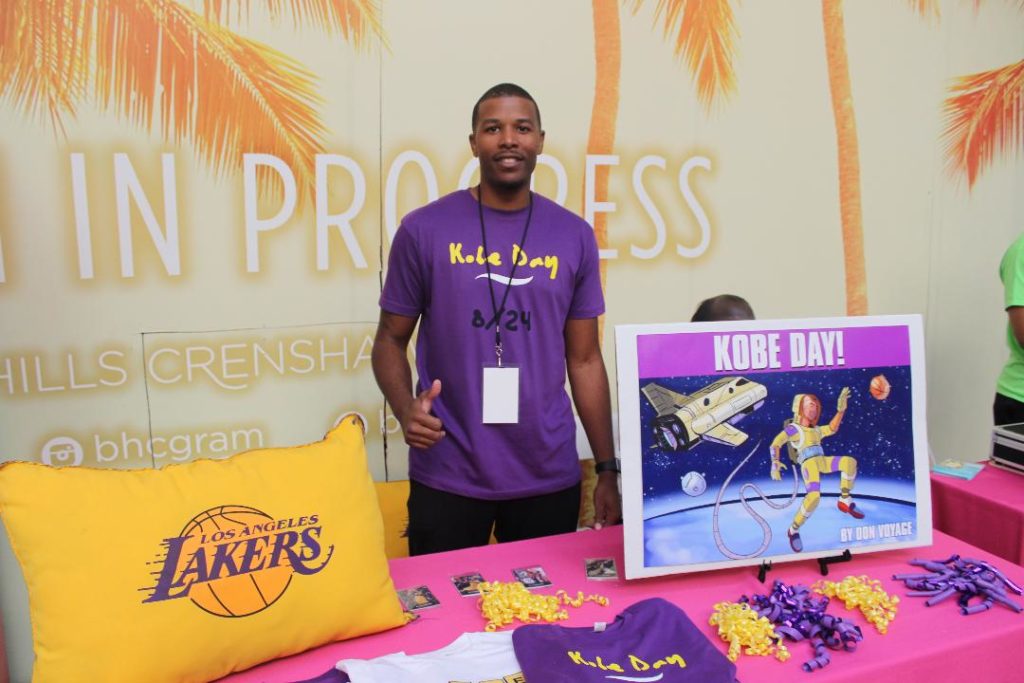 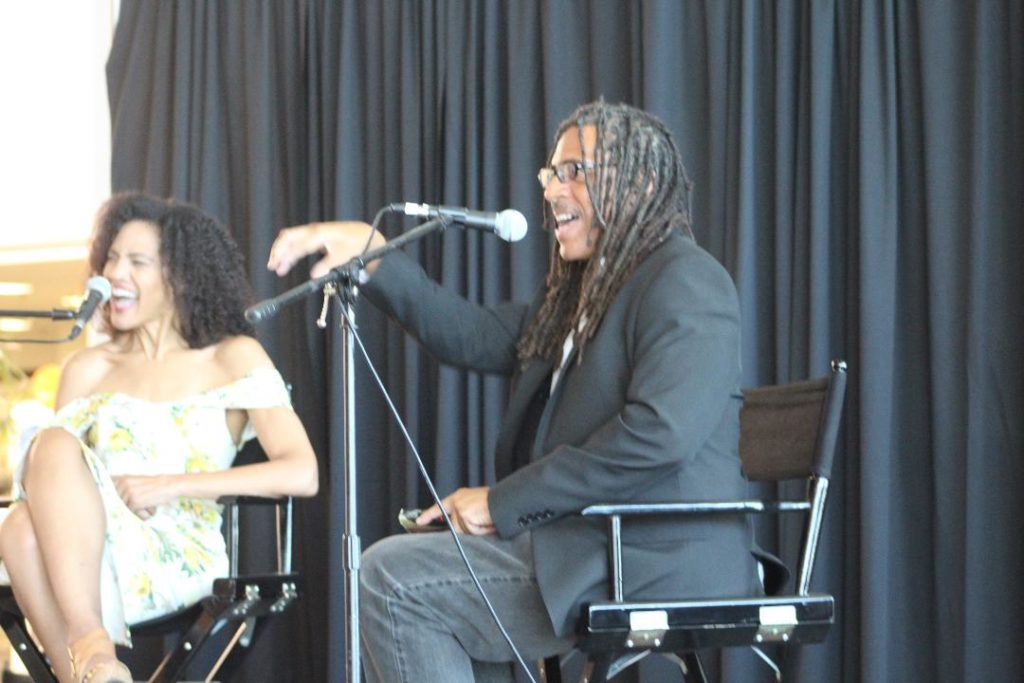 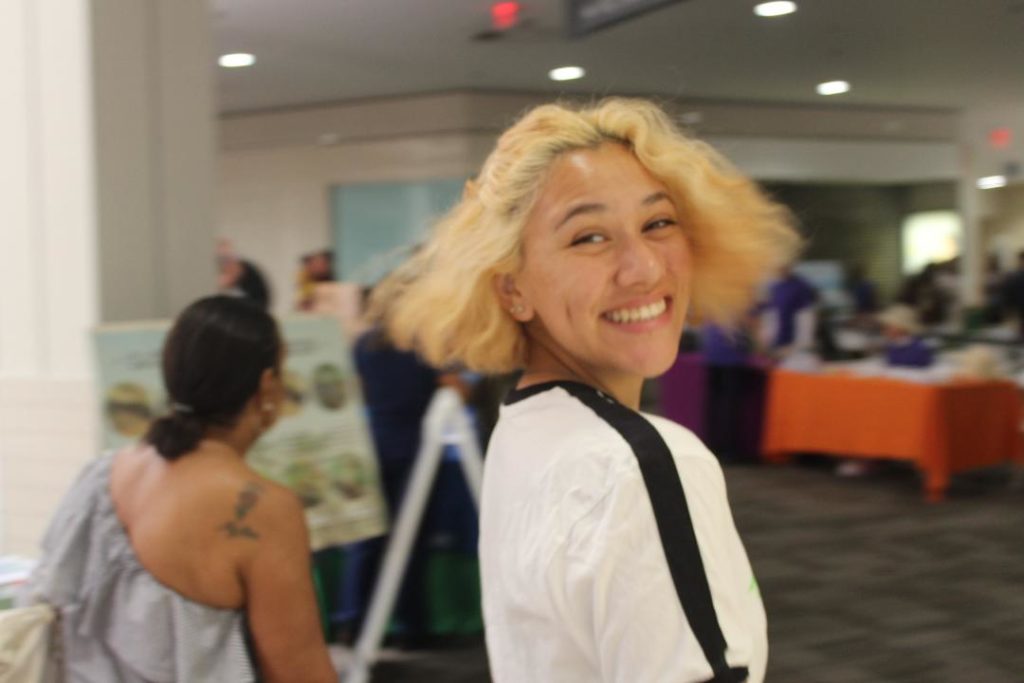 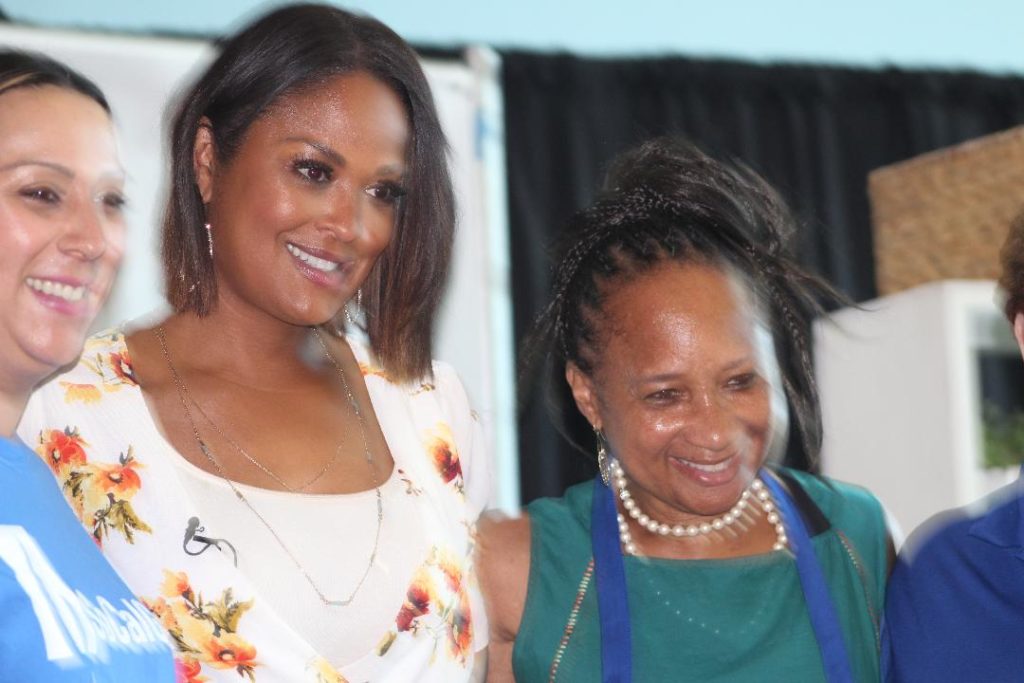 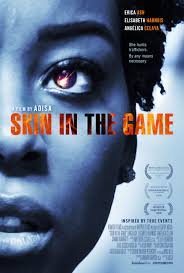 SKIN IN THE GAME: Movie Reviews

Bringing his hometown, Oakland, sensibilities to his film “Skin in the Game”, director Adisa takes us on a harrowing journey as Dani (Sammi Hanrathy) is taken off the streets of Los Angeles as her mother Sharon (Elisabeth Hornois) and her friend Lena (Erica Ash) search frantically for her.

Filmed entirely on location in Los Angeles, it gives it a strong level of significance as opposed to some none descript location. The back drop of the iconic signs and images show how the realities of human and sex trafficking home to a major U.S. city.

What’s happening on the screen reflects what’s happening on U.S. streets. On April 11, 2018, President Trump signed the “Stop Enabling Sex Trafficker’s act into law. This was aimed at closing websites that enable the crime to occur and prosecuting their owners and uses.

The United States Justice Department estimated that 35, 500 to 170,500 people are trafficked into the country each year.

Film has a strong message of the human and sex trafficking. California along with Atlanta and New York makes it vulnerable to this trade because of its proximity to international ports and airports, its large immigration populations, large economies and industries that attract human traffickers.

Skin in The Game is a good film that tackles an extremely important issue the U.S. and the world.

How female are groomed and exploited has a huge impact and how quickly a female can be turned out.

Sound track works well with the intense drama that takes place as Sharon and Lena roam? the streets of Southern California going house to house looking for Dani.

Skin in the Game reminds us of the growing industries of human and sex trafficking in the United States and the strong presence in its major cities.

Through The Lens of a Female Combat Veteran Remy Auberjonis makes his directorial debut with his compelling drama BLOOD STRIPE that exposes the horrific toll of war on US Marine combat veteran, Sarge (Kate Knowlin), after three tours of duty in Afghanistan and the challenges she faces as she attempts to find her place at home and in her community. So often, films show the effects of war on our male combat soldiers and seeing the hardship and struggles from a women’s perspective adds a new dimension to the conversation on veterans and PTSD.

Returning to her husband, Rusty (Chris Sullivan) in their small town, Sarge does her best to assume her role as his wife, but her violent temper, excessive drinking and the painful exercise routine that she subjects herself to, makes it exceedingly difficult for her to cope, yet she refuses to go to the VA hospital for medical care because of substantial wait time for treatment. Imagine, having a PTSD crisis and later off to the kitchen cooking, cleaning and pouring coffee. The honeymoon is short lived.

When she is honored with a celebration it triggers another PTSD episode and the natural human instinct of self- preservation kicks in and fear and flight takes over. Where does one go for help? She runs and runs until she finds herself at a lakeside camp, the great outdoors, where she vacationed as a child.

Upon reaching the camp, she is not alone and finds caretaker Dot (Rusty Schwimmer) and her husband closing the camp for the season. Dot barters with Sarge for room and board in exchange for her doing caretaking chores. Dot’s way of doing what she can to help an injured soul.

The grueling work required provides Sarge with a small amount of reprieve from emotional and mental anguish yet the demons keep roaring back as she struggles for her sanity. As the saying goes, Where ever you go, there you are.

By choosing a small town and the summer camp as well as not showing Sarge in actual combat, her character is not lost in what is happening around her and is kept in the forefront of the film.

A non-traditional take on military veterans with a female Shero. A film worth seeing. 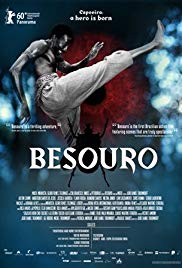 Joao Daniel Tikhomiroff’s first feature film “Besouro” tells the story of Master Alipio (Macale) who teaches the art of Capoeira to Besouro (Ailton Carmo, a professional Capoeira player), and in the dual roles as Dinora and the wind and water Goddess Orixa (Jessica Barbosa) and Quero-Quero ( Anderson Santos de Jesus) beginning in their youth. Col Venancio  a wealthy white landowner exploit its blacks citizens as though they are still living under the slavery system. Colonel eventual has Master Alipio murdered. From the grave, he urges Besouro (Ailton Carmo,) and the hero in the Afro-Brazilian myth, fight for the people as the Col attempts to stop the rebellion.

The fighting, dancing and aerobics choreographed scenes are set in the beautiful Brazilian sanctuary of Chapada Diamantina. Seeking refuge in the beautiful Bahia jungle., Besouro receives magical powers and soars through the sky.

What stands out. A valuable way to carry on an important part of their rich culture. Capoeria players, lead by Besouro, a hero to Afro Brazilian. Away to transend the oppression, even if only for moment. Does film have a message or solicit a response

Besouro is well written with a great story, a beautiful setting amidst  misery. A good film

In Search of Voodoo: Roots to Heaven: Film Review

AT THE FEET OF VOODOO

Going back to his birthplace of Benin , West Africa, actor Djimon Hounsou’s takes you on his personal journey In Search of Voodoo: Roots to Heaven.

Motivated to dispel the myths and misunderstanding about Voodoo, Hounsou educates people about he cultural significant voodoo has on the people of Benin. with an honest look at the ceremonial practices of voodoo.

Watching the animal sacrifices made during the intricate ceremonies, one is reminded of other readings that depict very similar performance practices.

The vibrant colors of the natural settings of the villages and the use of the single-camera.

Being able to hear those that practice Voodoo speak on

Editor, Douglas Thompson, provides an intense and dramatic transition from the coast of Benin to the village ceremony as the different elements of worship is incorporated.

Hounsou’s In Search of Voodoo is a good film that gives a personal and nonjudgmental view of a spiritual belief as it is experienced in its place of birth.

Your Choices Will Determine Your Destiny

Writer and Director, Qasim Basir’s drama DESTINED travels the two parallel life of Rasheed/Sheed (Cory Hardrict) as he navigates through the inner city and corporate boardrooms.

Set in Detroit and filmed in the Motor City, the film provides an ideal backdrop to the violent and gritty life on the streets for Sheed, as he hustles his way to the top in the drug world and becomes a kingpin and for Rasheed, working as an architect in the city that gave us motor vehicle, wit6h his professional hustles up the corporate ladder.

Alternating back and forth between the two distinctly different stories can sometime be a challenge to keep up with, yet Basir does make an effort to provides assistance with understated changeovers as Rasheed pursues his goal of corporate dominance with a project that will have a major impact on the people he knows that still live in the hood and call it home and Sheed’s life on the street.

In addition to the great dual performances by Hardrict, you have Officer Holder/Dylan Holder (Jesse Metcalf), Officer Miller/Nathan Miller (Jason Dohring, who two characters add to the intrigue that is woven between Sheed and Rasheed’s world. Mayor Jones (Hill Harper) gives voice to the community that will be impacted by the gentrification of the projects being pursued by Rasheed. The issue of gentrification plagues far too many communities in America. Most of the people effected in these communities are the most vulnerable population who are unable to afford the cost of living in a place the called home. Giselle Porter, a girlfriend from the past (Zulay Henao) brings further drama.

Watching the lives of Sheed, an successful drug dealer and Rasheed, an equally successful architect, brings to mind a number of former drug dealers that have used their innate understanding of running a business that includes marketing strategies developed on the streets slinging dope, who have transferred their important skill set to lawful and very lucrative careers in entertainment. It makes me wonder how many more young men, given the opportunity, could transfer their skills learned on the street for good causes. It is certainly something worth thinking about.

DESTINED is a unique perspective on how the decisions we make in life, especially in our youth, can determine the path that is before us. A good film to see.