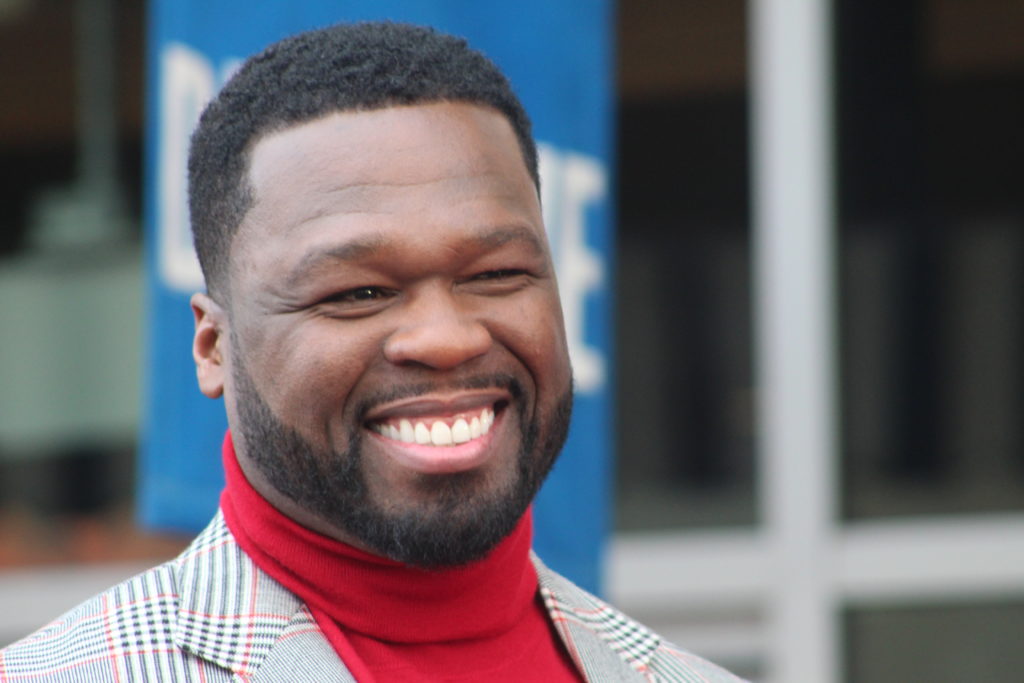 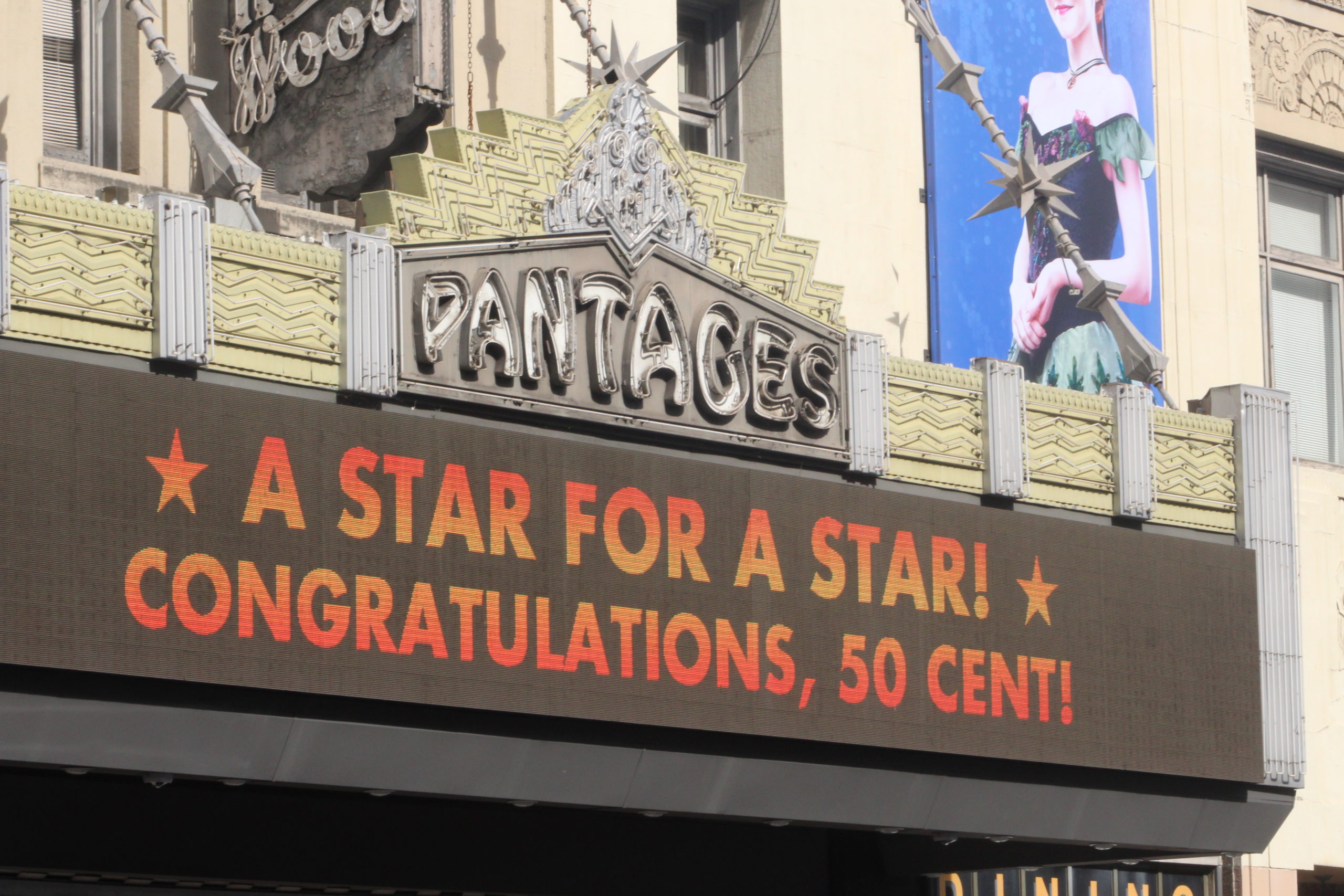 The star ceremony was hosted by Rana Ghadban, the president of the Hollywood Chamber of Commerce. The guest speakers included Managing Director, Legendary Global Chris Albrecht and Slim Shady and rapper Eminem.

50 cent received his star in the recording category.

With the success he has had in music with his East Coast hip hop group G-Unit and later his own label, G-Unit Records in 2003. He has sold over 30 million albums worldwide and has won a Grammy Award, 13 Billboard Music Awards, six World Music Awards,, three American Music Awards and four BET Awards.
50 Cent  pursued acting with  his emi-autobiographical film "Get Rich or Die Tryin", "Home of the Brave", "Righteous Kill", h   "Southpaw" and "Spy".    Television success with G-Unit Films and Television Inc., with the highly rated show "Power". 50cent will sure to be back on Hollywood Boulved receives stars in the film and television categories.
The man certainly has style and established G-Unit Clothing Company in 2003 He established publishing company G-Unit Books in 2007.
Stars were out to support 50 Cent. In the audience was his power co-stars LaLa Anthony and Joseph Sikora, Dr Dre, who produced his first album Get Rich or Die Tryin', comedian Michael Blackson, Top Dawg of TDE and many more. 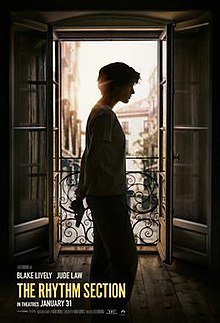 Recently graduating from college and excited to embark on her new career working in entertainment for one of the most powerful   moguls, Jane (Julia Garner) becomes disillusioned by the abuse taking place and decided to be the voice that speaks on behalf of all.

On November 4, 1995, Yigal Amir (Yehuda Nahari Halevi), an Israeli law student, violently opposed to the Oslo Accords, who along with his brother Hagai Amir (Yoav Levi), his accomplice, assassinated Prime Minister of Israel Yitzhak Rabin. Incitement looks at Amir's life beginning a year before his decision to take Rabin's life, in his effort to stop his signing of the Accord. Directed by Yaron Zilberman (A Late Quartet). Written by Ron Leshem,

The Brothers Grim's German tale of Hansel and Gretel gets an modern twist in director Oz Perkins' (Psycho II, I Am the Pretty Thing That Lives in the House) new film Gretel & Hansel. Flipping the script, it's teenager Gretel (Sophia Lillis, Nancy Drew and the Hidden Staircase) desperate to survive, who takes her much younger brother Hansel (Sam Leakey, film debut) into the woods in hopes of finding ways to sustain  them, only to walk into grip of an evil spirit. Screenplay by Oz Perkins, Rob Hayes. With

In the world of crime, being labeled a snitch puts a mark on your back and who would know better than Tommaso Buscetta (Pierfrancesco Favino in The Chronicles of Narnia: Prince of Caspian, World War Z). The Traitor tells the story of Buscetta life in the Mafia and his eventual cooperation with federal authorities, providing them with valuable information about Cosa Nostra and the Sicilian Mafia Commission that only someone on the inside could know. Directed by Marco Bellocchio. Screenplay by Marco Bellocchio, Valia Santella, Ludovica Rampoldi, Francesco Piccolo, Francesco La Licata. Story by Marco Bellocchio. With Luigi Lo Cascio as Savatore "Totuccio' Contorno, Fausto Russo  as Judge Giovanni Falcone, Maria Fernanda Candido as Maria Cristine de Almeida Guimaraes, Fabrizio Ferracane as Pillo Calo, Nicola Cali as Toto Riina, Giovanni Calcagno as Gaetano Badalamenti. Produced by Beppe Cashetto. Music by Nicola Piovani. Cinematography by Vladan Radovic. Edited by Francesca Calvelli. Production Companies: IBC Movie, Kavac Film Rai Cinema, Gullane, Ad Vitam Production, Match Factory Productions. Distributed by O1 Distribution. 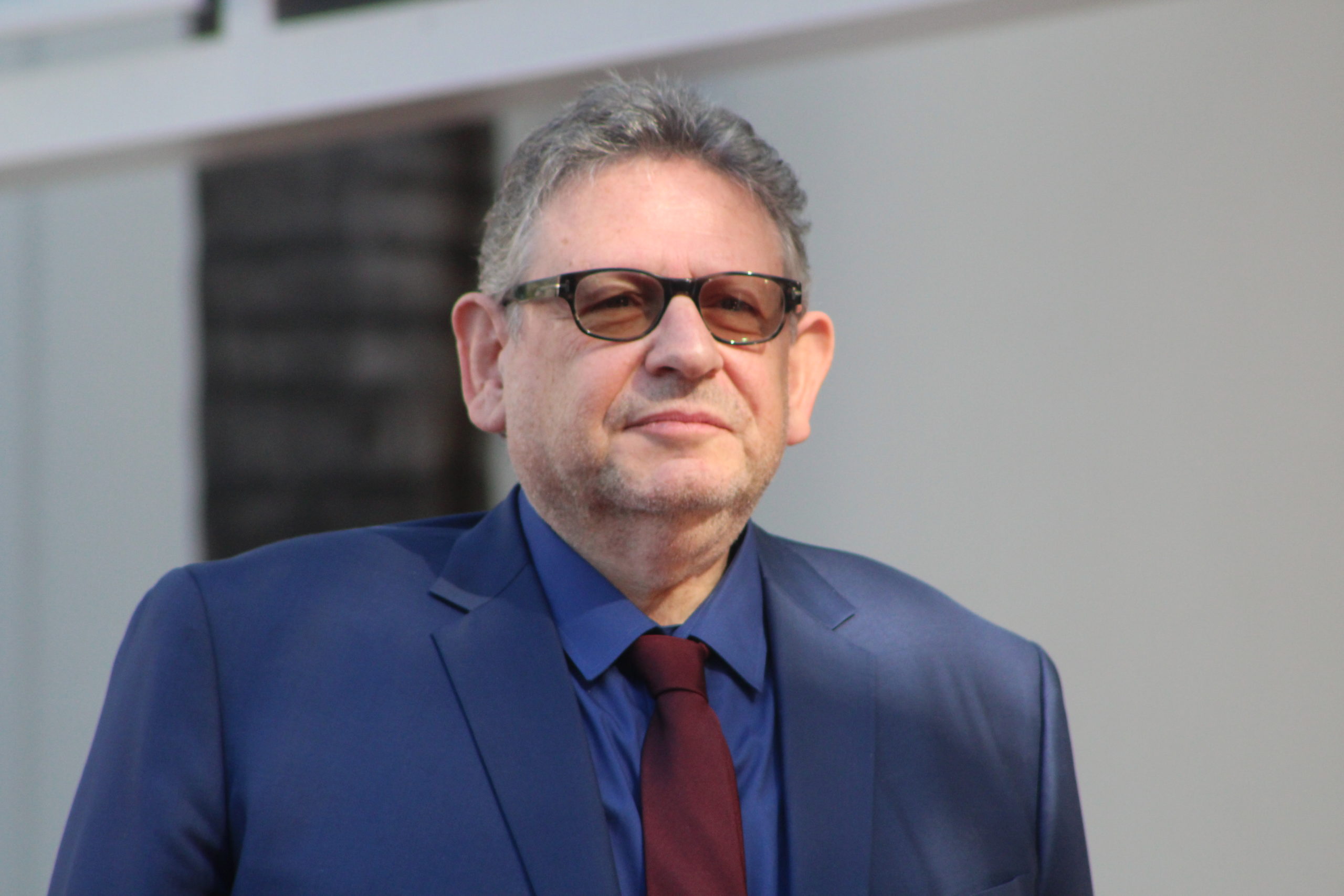 Take That, Psychedelic Furs, Eurhythmics, Andrea Bocelli, James Cullum, as well as Drake, Post Malone, Katy Perry and Maroon 5. With the acquisition of Bravado, it brought Justin Bieber and Kayne West into the Universal family.

The stars were out in force in support of Grainge. There to speak in his honor was Shawn Mendez and Lionel Ritchie, giving you the new and old school recording artists.

Grainge is the only person to have the honor of being the Billboard's "Power 100 List" most powerful person in the music industry in 2013, 2015, 2016, and 2019, which speaks volumes considering the many people in the music business.

As the largest black film critics association and whose membership is from around the country and globe, gives voice to all those who seek films that reflects the life and life experiences of people of color.

The AAFCA winners are listed below. 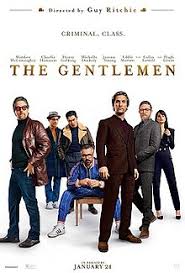 32 years after loosing his life on the battlefield in Vietnam, William H. Pitsenbarger (Jeremy Irvine), a true hero and airman, who on his very own saved sixty men, when his best friend Tully (William Hurt) and parents Frank (Christopher Plummer) and Alice Pitsenbarger (Diane Ladd) submits a request for a Medal of Honor. The Pentagon staffer assigned to investigate Pitsenbarger's loved ones request, Scott Huffman (Sebastian Stan), conducts interviews with war veterans with first hand accounts of PitTakosa (Samual L. Jackson), Burr (Peter Fonda, in his final role), Mott (Ed Harris). Directed by 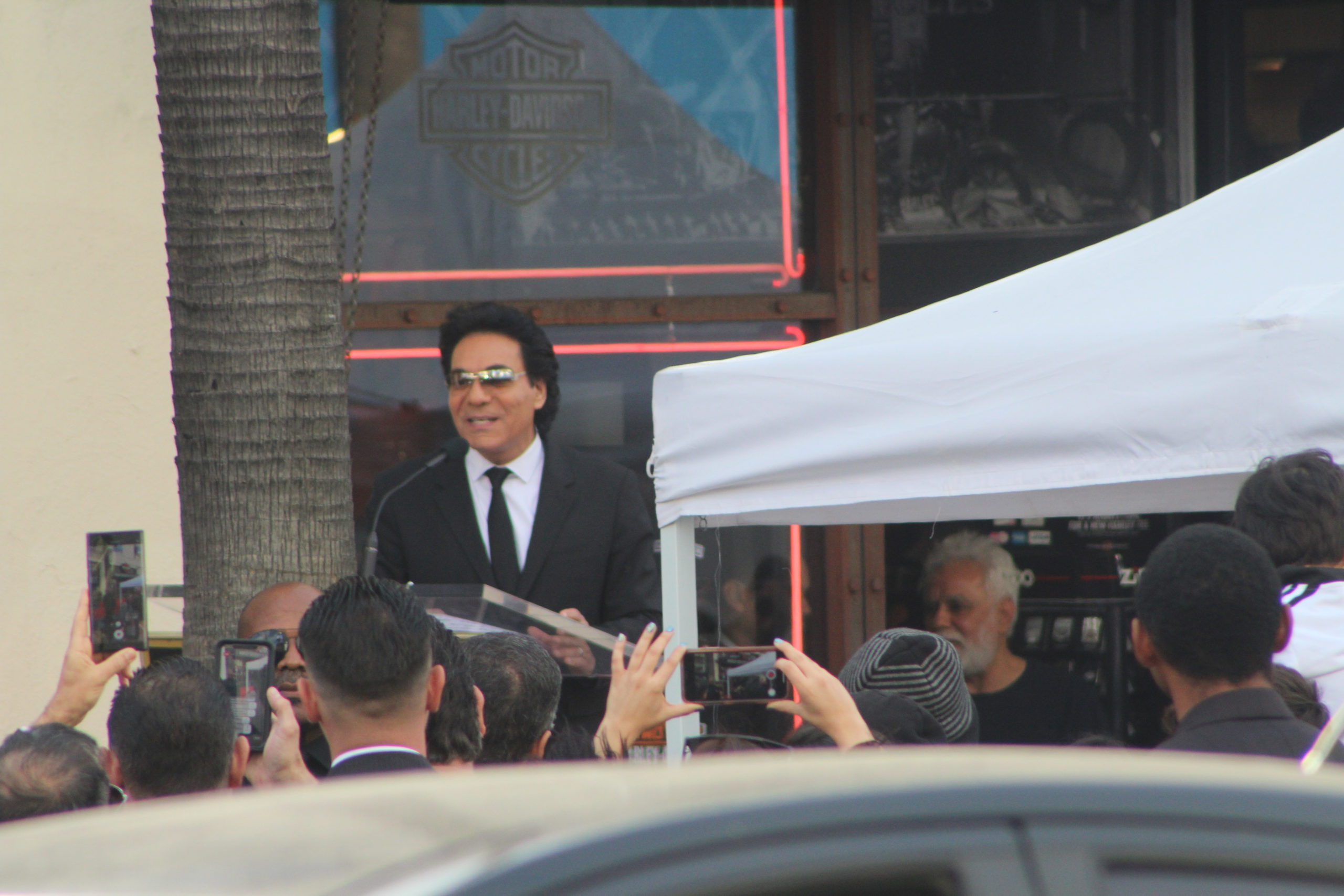 International recording artist Andy Madadian, the first Iranian to be honored, star was unveiled Thursday on the Hollywood Walk of Fame.

Sharing in his momentous occasion was LaToya Jackson, who collaborated on "Tehran", a 2016 single Miles Copeland III, the former manager of The Police and music and entertainment executive.

Arriving in the United States to play soccer at Cal State Los Angeles and has since made Los Angeles his home. He later formed a duo with Kouros Shamiri called Andy & Kouros. After releasing four albums between 1985 and 1991, they disbanded and pursued solo careers. Andy went on to release 16 albums.

An indication of his international stardom, he was nominated for Best Male Artist, Best Live Act, and Best Entertainer of the Year at the 2013 World Music Awards.

The World Premiere of Bad Boys For Life with the dynamic of Will Smith and Martin Lawrence in Hollywood.

The third installment finds Detective Mike Lawry (Will Smith) leading a group of millinial police officers in AMMO and Detective Marcus Burnett (Martin Lawrence) a police inspector looking forwad ready to retire when a  mafia boss seeks revenge for his brother who was brought down by Lawry and Burnett.

Based on characters by: George Gallo.

Tom Hanks, A Beautiful Day in the Neighborhood
Anthony Hopkins, The Two Popes
Al Pacino, The Irishman
Joe Pesci, The Irishman
Brad Pitt, Once Upon a Time… in Hollywood

How to Train Your Dragon: The Hidden World
I Lost My Body
Klaus
Missing Link
Toy Story 4

American Factory
The Cave
The Edge of Democracy
For Sama
Honeyland

Learning to Skateboard in a Warzone (If You’re a Girl)

“I Can’t Let You Throw Yourself Away,” Toy Story 4

“I’m Standing With You,” Breakthrough

“Into the Unknown,” Frozen II

Detective Mike Lawry (Will Smith) leading a group of millennials police officers in AMMO and Detective Marcus Burnett (Martin Lawrence) a police inspector looking forward ready to retire when a  mafia boss seeks revenge for his brother who was brought down by Lawry and Burnett.

Withdrawing from the world after the death of his wife, Lily (Kassia Smutniak), Doctor Dolittle (Robert Downey Jr.), a renowned veternarian, finds a renewed purpose when he sets on a voyuage to save the Queen, Queen Victoria when an unknown illness threatens her life.

A true story of Walter McMillian (Jamie Foxx) wrongly convicted for murder in Alabama on a false witness and coercion by corrupt police and sentenced to death by the presiding judge. With the dedication of Harvard educated lawyer Bryan Stevenson (Michael B. Jordan), the newly appointed director of Alabama Capital Representation Resource Center, who became McMillian's appeals attorney.

Hero tells the story of Ulric Cross (Nickolai Salcedo, Play the Devil), born in the Caribbean nation of Trinidad and Tabago, who became a squadron leader for the United Kingdom's Royal Air Force (RAF) that consisted of a group of Caribbean pilots that were compared to the Tuskegee Airmen. In addition to being a fighter pilot, Cross was also a diplomat and judge and had a significant role in the Pan African Movement and the Independence of African and Caribbean nations.

It is PAFF’s goal to present and showcase the broad spectrum of Black creative works, particularly those that reinforce positive images and help destroy negative stereotypes. We believe film and art can lead to better understanding and foster communication between peoples of diverse cultures, races, and lifestyles, while at the same time serve as a vehicle to initiate dialogue on the important issues of our times.

Established in 1992, The Pan African Film Festival (PAFF) is a non-profit 501(c)(3) corporation dedicated to the promotion of cultural understanding among peoples of African descent. PAFF is dedicated to racial tolerance through the exhibition of film, art and creative expression.

Since 1992, every year PAFF-LA showcases over one hundred fifty (150) quality new films and over one hundred (100) fine artists and unique craft persons from the United States, Africa, the Caribbean, Latin America, South America, Europe, the South Pacific and Canada, all showcasing the diversity and complexity of people of African descent. For the past 16 years PAFF-ATL has put on a summer festival formerly presented by the National Black Arts Festival, exhibiting the best films from PAFF-LA supplemented by Atlanta submissions catering to the Atlanta audience. Both festivals feature special red carpet screenings and receptions as well as a variety of other special events including panels & workshops headed by industry professionals on various topics surrounding acting, directing and other film industry related topics.