“In this time of reckoning in the country, Rachel Boynton’s journey into the heart of Civil War memory reveals just how contested, and personal, the meaning of this defining event in our history remains.” – Henry Louis Gates, Jr.

“[A] remarkable documentary… Delicately artful… There is
no shortage of provocative inquiry, or empathy, or understanding.”
– John Anderson, The Wall Street Journal 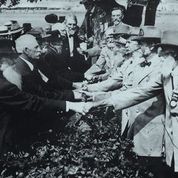 Union and Confederate veterans shaking hands at reunion to commemorate the 50th anniversary of the battle of Gettysburg as seen in Civil War (or, Who Do We Think We Are) , directed by Rachel Boyton. Image courtesy of the U.S. Library of Congress.

CIVIL WAR (OR, WHO DO WE THINK WE ARE), a timely and probing look at how Americans tell the story of their Civil War and its legacy of slavery and racism, will premiere on MSNBC on Sunday, October 24 at 10:00pm ET. Directed by three-time Emmy nominee Rachel Boynton (Big Men, Our Brand is Crisis), the film includes Henry Louis Gates Jr., Sam Pollard and Brad Pitt among its executive producers.

CIVIL WAR (OR, WHO DO WE THINK WE ARE) travels across the United States—particularly to its classrooms—to explore the different ways the Civil War has been taught and interpreted, commemorated and celebrated. Filmed from the last year of Obama’s presidency through the present, it interweaves insightful scenes and candid interviews filmed North and South, painting a uniquely crafted, multi-faceted portrait of our national narrative. With subtlety and determination, CIVIL WAR portrays a nation in denial, haunted by an embittered past and the stories it refuses to tell.

CIVIL WAR (OR, WHO DO WE THINK WE ARE) was written and directed by Rachel Boynton and produced by Rachel Boynton and Erika Dilday. It was shot by Nelson Walker and edited by Steven Golliday, Mark Juergens and Rachel Boynton. Executive producers are Henry Louis Gates, Jr., Brad Pitt, Dede Gardner, Jeremey Kleiner, Steven Shainberg, Sam Pollard, Robert S. Kravis, and Rick Rosenthall. Music is by Nathan Larson. 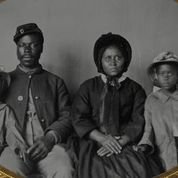 An unidentified African American soldier in a Union uniform with wife and two daughters as seen in Civil War (or, Who Do We Think We Are) , directed by Rachel Boyton. Image courtesy of the U.S. Library of Cong 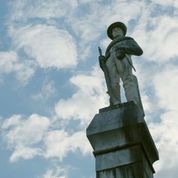 A confederate statue in front of the old courthouse building in Lexington, MS as seen in Civil War (or, Who Do We Think We Are) , directed by Rachel Boyton. Photo credit: Nelson Walker III

Rachel Boyton, director of Civil War (or, Who Do We Think We Are). Photo credit: Justine Cooper

About the Director Rachel Boynton

This is Rachel Boynton’s third film in a series examining the systems that control how Americans live and relate to the rest of the world. She consistently probes and questions the beliefs and stories that bind America as a nation. Her first feature documentary, Our Brand is Crisis, explored democracy and democratic ideals: it followed a group of American political consultants as they traveled to South America to help Gonzalo Sanchez de Lozada become President of Bolivia. It was the winner of the International Documentary Association's Best Feature Documentary Award and was nominated for an Independent Spirit Award. Rachel’s second film, Big Men, explored international capitalism and its principles: it focused on Americans operating in the oil industry in West Africa. Big Men was released theatrically in the US in 2014 and aired on the PBS series POV. The film was nominated for three News and Documentary Emmy Awards including Best Documentary. Civil War is Rachel's first film to be shot exclusively in the United States.