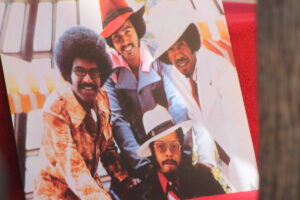 Old School R&B legends The Chi-Lites received the 2,702 star on the Hollywood Walk of Fame on Thursday, September 30th.

Their new star is in the recording category and located at 7057 Hollywood Boulevard at Sycamore Avenue.

On hand to assist the Hollywood Chamber Chair of the Board Nicole Mihalk honor the Chi- Lites where actor of 'Good Times' fame, Jimmie Walker and New York syndicated and Sirius/XB radio personality Jeff Fox. 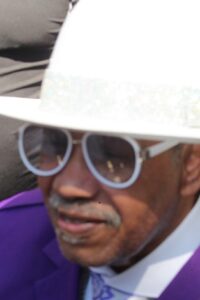 Gone to soon, but certainly not forgotten during the celebration, were founding members Eugene Record, Robert 'Squirrel' Lester, and Creadel 'Red' Jones, who were all acknowledged and celebrated on Thursday.

The poster of Creadel 'Red' Jones, Robert 'Squirrel' Lester, and Eugene Record, and Marshall Thompson on display kept them front and center throughout the Walk of Fame ceremony. 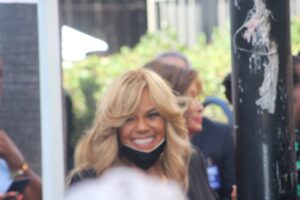 In the audience to support the Chi-Lites was Claudette Robinson, the First Lady of Motown and an original member of The Miracles, , Good Times' Bern Nadette Stanis, Freda Payne, and Angela Yevette, daughter of Creadel 'Red'Jones and others.

Marshall Thompson formed the group the "Hi-Lights in 1959 with his friends Eugene Record, Robert 'Squirrel' Lester, and Creadel 'Red 'Jones in Chicago, Il. In 1964 the groups name was changed to 'Marshall & The Chi-Lites. It was 1969 when they were signed to Brunswick Records, headed by Carl Davis and Nat Tarnopol and known world wide as 'The Chi-Lites.

Some of their memorable songs from their more than 60 years in the business, include What Do I Wish For, Give More Power to the People, Let Me Be the Man My Daddy Was, Lonely Man, Oh Girl, Have You Seen Her.

As a final note, the Chi-Lites fans and supporters were looking good, dressed to-the-nines and ready for a Hollywood party.

Old School R&B legends The Chi-Lites received the 2,702 star on the Hollywood Walk of Fame on Thursday, September 30th.

Their new star is in the recording category is located at 7057 Hollywood Boulevard at Sycamore Avenue.