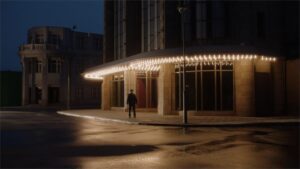 THE WILD ONE illuminates the journey of an enigmatic artist, Jack Garfein—Holocaust survivor, celebrated Broadway director, Actors Studio West co-founder, and controversial filmmaker. It examines how his experience in the concentration camps shaped his vision of acting as a survival mechanism and propelled his engagement with themes of violence, power, and racism in postwar America in two explosive films "The Strange One" (1957) and "Something Wild" (1961). The film explores the importance of his legacy as an artist who confronted censorship and reveals how art can draw on personal memory to better enlighten our present.

Tessa Louise-Salomé is a Paris-based director, writer, and producer whose work foregrounds visually poetic approaches to storytelling. Her films as a director include the Sundance Jury Prize nominee Mr. Leos caraX.  Her films as a producer include documentaries that combine social justice issues with a focus on the artist’s creative universe, and have premiered at the Cannes Film Festival, Venice Film Festival, IFFR, and CPH:DOX.