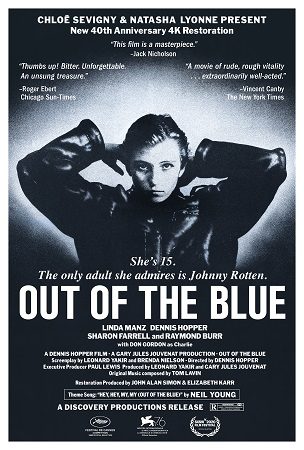 The 4K Restoration of Dennis Hopper's OUT OF THE BLUE, timed to its 40th Anniversary, will soon have a regional expansion: Los Angeles, Toronto, Vancouver, Chicago, Seattle, Atlanta, New Orleans, Nashville and more. 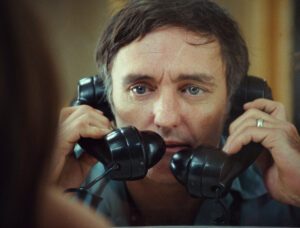 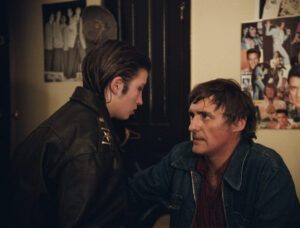 “In many ways, it’s maybe my best film.” - Dennis Hopper

“If a masterpiece comes along, people ought to see it.” - Jack Nicholson

A kind of spiritual sequel (and cautionary counterpoint) to Hopper’s own Easy Rider, OUT OF THE BLUE chronicles the idealism of the sixties decline into the hazy nihilism of the 1980’s.

Don Barnes (Dennis Hopper) is a truck driver in prison for drunkenly smashing his rig into a school bus. Linda Manz (Days of Heaven) plays Cebe, his daughter, a teen rebel obsessed with Elvis and The Sex Pistols. Her mother (Sharon Farrell) waitresses, shoots up drugs and takes refuge in the arms of other men. Cebe runs away to Vancouver’s punk scene and ends up on probation under the care of psychiatrist Raymond Burr. After Don’s release, the family struggles to re-connect before the revelation of dark secrets leads to a harrowing conclusion.

ABOUT DENNIS HOPPER: Born in Dodge City, Kansas, May 17,1936: Actor-director Dennis Hopper’s “Out of the Blue” premiered at Cannes in 1980. His directorial debut, “Easy Rider “(1969, Cannes Award “Best First Work,” was a countercultural landmark whose success helped spark the New Hollywood era of seventies filmmaking). His follow-up “The Last Movie” (1971) won the CIDALC Critics Prize Award at the Venice Film Festival. He went on to direct “Out of the Blue,"(1980) - Official Cannes selection; “Colors," (1988) “Backtrack,” (1990) and “The Hot Spot,” (1990). His 200+ acting roles include “Rebel Without a Cause,” “Giant,” “Mad Dog Morgan,”
“Apocalypse Now,” “Blue Velvet,” and “Hoosiers” (Academy Award nomination, Best Supporting Actor).
Also a renowned photographer and artist, Hopper died in Los Angeles, May 29, 2010.

Working from the original 35mm negative restored by Discovery in 2010, John Alan Simon and Elizabeth Karr’s Discovery Productions undertook the digital scan and mastering of Out of the Blue to premiere as an official selection at the Venice Film Festival in 2019, preserving Hopper’s landmark film to make it available to new audiences.The New 4K restoration was shown for the first time on the big screen theatrically at Metrograph in November, 2021 in New York.

Despite critical acclaim at its original Cannes premiere in 1980, OUT OF THE BLUE went unreleased because it was considered too bleak for U.S. audiences.
John Alan Simon, then a film critic/journalist, rescued the film from the shelf, secured distribution rights and took it on the road with Dennis Hopper back in 1982 to art house theaters across the U.S. including a 17-week record-breaking run at the Coolidge Corner Cinema in Boston and then NYC and Los Angeles theatrical releases.

“It’s incredibly important to us that OUT OF THE BLUE be preserved for future generations to experience its emotional impact and as the artistic achievement that helped re-establish Dennis Hopper as an important American director,” commented Elizabeth Karr on behalf of Discovery Productions.

"For me, this restoration project was pay-back for all I learned from Dennis Hopper when we originally took OUT OF THE BLUE on the road in 1982 after I rescued it from the shelf. He was an amazing artist and friend and OUT OF THE BLUE remains as unforgettable as he was and serves as an indelible tribute to the talents of Linda Manz,” John Alan Simon from Discovery Productions concluded.

Chloë Sevigny and Natasha Lyonne came onboard as presenters for Discovery Productions’ OUT OF THE BLUE 4K restoration and 40th Anniversary Theatrical Re-release.

"Out Of The Blue" - what a great movie! Linda Manz in that movie, mama mia!” - Natasha Lyonne on NPR interview with Terry Gross

“I love actress Linda Manz! As Cebe in “Out of the Blue”, arguably one of the best teen characters ever portrayed on film.” - Chloë Sevigny (from her Instagram)

The distribution arm of Discovery Productions has released independent films, including RADIO FREE ALBEMUTH, the adaptation of
the sci-fi novel by Philip K. Dick, directed and adapted by John Alan Simon and Dennis Hopper’s OUT OF THE BLUE, currently embarking on
its 4K digital restoration and 40th Anniversary