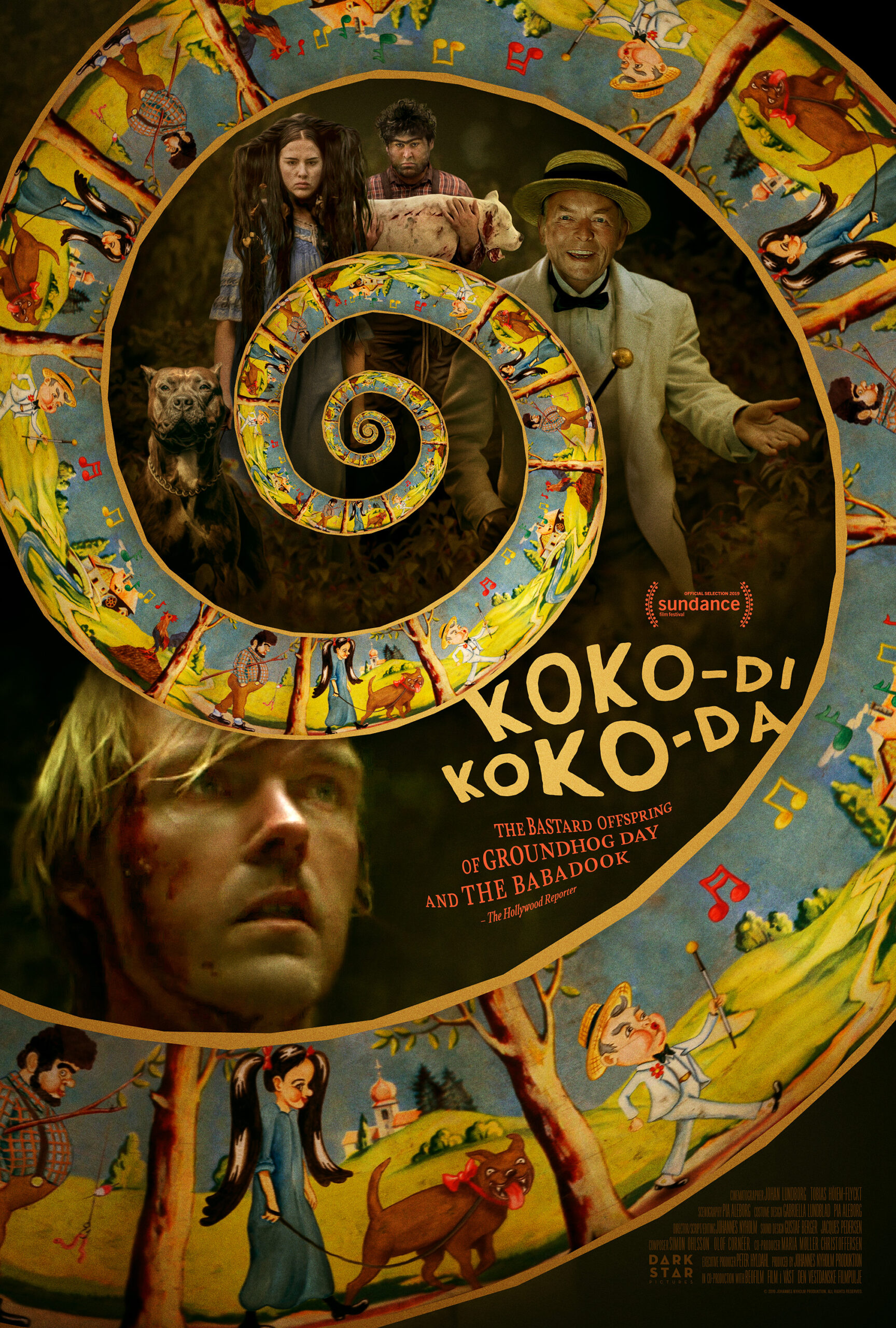 Tobias (Leif Edlund), Elin (Ylva Gallon) and their daughter, Maja (Katarina Jacobson) travel to Demark to celebrate Maja’s 8th birthday. Wearing their finest rabbit painted faces, they enjoy the  day before her birthday with an enjoyable lunch. After lunch, Maja came upon a music box that played the Swedish nursey rhyme, Our Rooster Is Dead, that had her mesmerized. Her parents purchase the music box as a birthday present and have it gift wrapped. Things take a sudden horrific turn when Elin and Maja suffer from an allergic reaction to the shellfish they had for lunch in director Johannes Nyholm’s film KOKO DI KOKO DA.

Determined to celebrate their daughter and work on their crumbling marriage, Tobias and Elin set off on a  camping trip that is soon anything but celebratory when three characters , Mog, a man with a straw hat (Peter Belli), Sampo, a huge giant of a man (Morad Baloo Khatchadorian) who carries a dead dog, and Cherry, a young woman with long black hair (Brandy Litmanen) with a vicious dog on a leach that is pictured on the music box, comes to life and torments Tobias and Elin over and over and over again.

The bright, cheery atmosphere of Tobias, Elin, and Maja enjoying their lunch date, their laughter, their faces painted as rabbits shows the love, happy, and fun times the family shared. The changes in lighting as they arrived at their camping site in the forest.

Cinematographers Johan Lundborg and Tobias Holem-Flyckt keeps the  fear going strong with the  images depicted in the dark and creepy woods as three of Satan’s own torments them.
Olof Cornéer and Simon Ohlsson music scores provides suspense

After leaving the gas station, in route to the forest, Elin and Tobias are on the verge of a heated discussion because of  Tobias’ perceived in difference to Elin and his constant joking, when Elin  says to Tobias, “why don’t you say what you actually mean, for once?  Tobias then tells her  “I love you”. The line was a great neutralizer and diffuse the situation so they can at least start on the same page.

The two times the film transitioned into an old school curtain puppet show animation with three rabbits representing the family to tell the story of Maja death and the old rooster adds a surprising and unique element to the storytelling.

Considering how much Tobias liked to joke, it made for some funny moments in an otherwise deeply disturbing film, when Tobias, scarred to death, runs around frantically in his underwear.

Koko-Di Koko Da  conveys a powerful message of the importance of people confronting and learning to deal with issues of grief and pain that resides in oneself, because if not, life will become one big loop, with  the pain and sorrow endlessly replaying over and over and over again, making the life’s obstacles difficult to overcome.