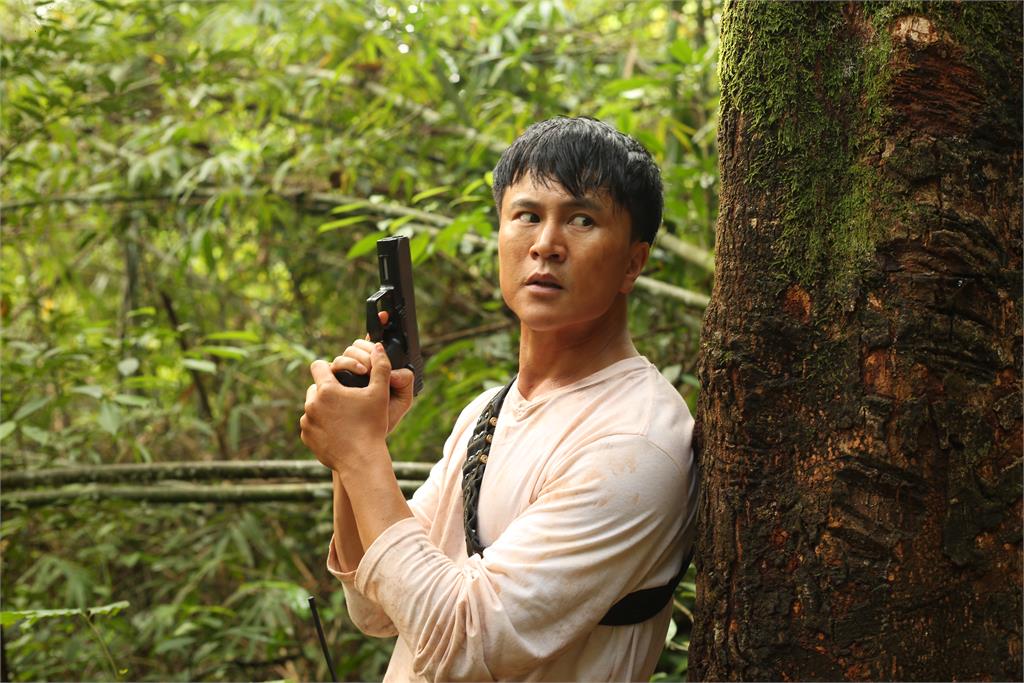 Director Jimmy Henderson’s (Jailbreak) new film THE PREY, inspired by Richard Connell’s The Most Dangerous Game, is a riveting drama about  Xin (Gu Sheng Wei, “Bloody Destiny”), an Chinese undercover police officer, working an international case in Cambodia, who gets caught-up in a police raid and ends up at the mercy of The Warden (Vithaya Pansringarm “Only God Forgives”) the ruthless, demonic head of a remote prison located in the jungles Cambodia.

It didn’t take long for Xin to become a central figure in The Warden’s sadistic ritual of a human hunting season for those with the money pay and the stomach to endure the gruesomeness of the sport. The Warden’s obvious pleasure in the torture of prisoners, while singing and dancing, is disturbing all so many levels.

Henderson, Michael Hodgson, Kai Miller’s storyline with the mental instability of The Warden and unsettling desires of the hunters provides for some unpredictable outcomes, because you never know what someone void of human emotions can do.

With the male dominated prison storyline,  , they found a great way to bring in female character, Detective Li (Dy Sonita “Jailbreak”.) in a male dominated environment. Her button-up blouse and unassuming ponytail gives the impression of a meek personality. That assumption is soon put to rest as she holds her own against the ruthless Warden and hunters as she fights for survival.

As The Warden said to Xin, “you thought hell was a fairy tale. I made it real.”

The hell on earth was brought into existence with the help and participation of Mat (Byron Bishop “Only God Forgives”), Makara (Sahajak Boonthanakit “Only God Forgives”), Ryu (Dara Our “Jailbreak”), the hunters who paid the big bucks to hunt humans.
The idea of rich people going on a hunting trip where prisoners are the prey seems farfetched, yet it is possible that some hunters who become bored with hunting animals, would turn to hunting those who are left, human beings.

The lush, green and serene interior of the jungle and the beautiful, scenic water fall and river provides a contrast to the violence of the hunters and the lack of humanity in the murder of the hunted in its mist really stands out and adds to the experience.
Officer Xin and all the other prisoners truly have hell to pay, at the hands of The Warden, while on the inside of prison. THE PREY is a good film with plenty of action and suspense to keep your eyes on the screen.
Run time: 1 hr. 33 min
Distributor: Dark Star Pictures, North American Distribution
Production Co: Altered Vision Films, Prince Social Marketing, Kongchak Pictures
Cast: Byron Bishop, Sahajak Boonthanakit, Nophand Boonyai, Vithaya Pansringarm, Gu Shangwei,
with Rous Mony, Dy Sonita
Executive Producers: Chen Zhi, Guy Chhay
Producers: Jimmy Henderson
Associate Producers: Loy Te, Li Tao,
Director: Jimmy Henderson
Written by: Jimmy Henderson, Michael Hodgson, Kai Miller
Director of Photography: Lucas Gath
Music: Sebastien Pan
Release date: August 21, 2020 in North America
Virtual Theaters: August 21. Including Los Angeles (Laemmle), New York (Alamo On Demand), and major cities
VOD (US & Canada): August 25, 2020. Including ITunes, Amazon, Google Play, Xbox, Vudu, DirecTV, Dish Network and all major cable providers