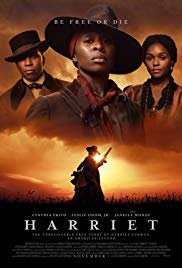 Director Kasi Lemmons brings her Herstoryy to the big screen with her new film, Harriet. Co-written with Gregory Allen Howard, brings to life the harsh struggles of Harriet Tubman and despite being born into slavery and eventually escaping, she went on to assist in the freedom of hundreds of slave along the Underground Railroad.

Staring Tony-award winning actress Cynthia Erivo as Tubman, who despite the controversy of the non-casting of an American born black actress, gave a compelling performance as Harriet. William Still, a writer and abolitionist who connects Tubman with the Underground Railroad  (Leslie Odom Jr.) Gideon Brodess, Harriet's slave owner (Joe Alwyn) as Marie Buchanon, a proprietor and friend of Tubman (Janelle Monáe ),

Filmed entirely on location in the State of Virginia where slavery ran long and deep, gives an authentic backdrop to Herstory of life as a slave and former slave in the deep south..

HARRIET is a film that should be seen, and not merely for an entertainment value, yet for the significance of Harriet Tubman’s to American  Herstory.