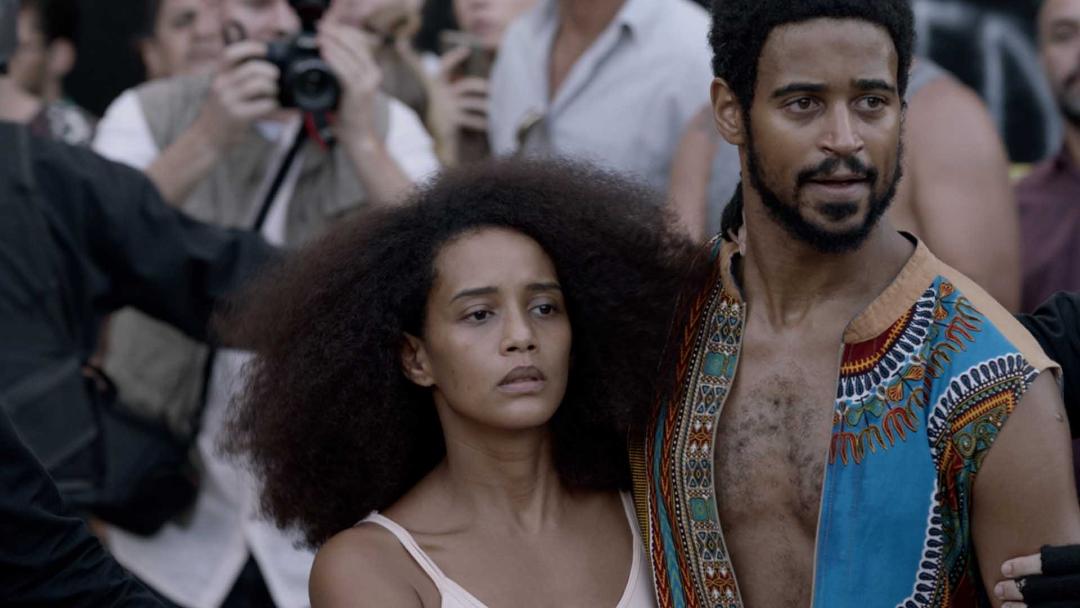 Ramos tackles an age-old topic of compensation for the descendants of enslaved Africans. Slaves, whose forced labor built countries’ wealth around the globe, including his home country of  Rio de Janeiro, Brazil.

Lawyer, Antônio, (Alfred Enoch)  takes legal action against the Brazilian government demanding compensation for all the descendants of the countries’ African slaves.  Taking on the government requires Antônio to seek help, so he enlist his cousin, André (Seu Jorge) and wife Capitu (Taís Araújo) to force the change the want to see.

The government’s response is to force a  Back-to-Africa movement like those that took place in the 1700 and 1800s in the United States. The powers that be have never taking reparations seriously as evident by the continued discussion and no action.  The topic also evokes varied responses from both sides of the issue. When talking about going back to Africa, Sierra Leone and Liberia, two African countries formed by former slaves. Here in the United States people are still waiting for their 40 acres and a mule, promised to freed American slaves, that have yet to be delivered.

Lázaro Ramos, “Its political significance is to put so many black actors, in great part, speaking freely bout themes that are important for them. “ We’re living a historical moment in the world where polarizing positions are dominating the narratives, where there’s an attempt of simplifying people as if they were only defined by a single adjective.

Based on that, criminalizing, discriminating, undermining, silencing them has become a central issue. The film is an attempt to show that we have more layers than the current narrative. That said, yes it is a criticism to the extremes and an attempt to foresee our next steps in order to avoid all this radicalism in which we all live in now.

The stars of the film are the following:

Antônio (Alfred Enoch) is an actor of Anglo-Brazilian descent whose mother was born in Rio de Janeiro. He established himself in the movie business as Dean Thomas in the “Harry Potter” movie series and playing Wes Gebbin in the ABC TV series, “How To Get Away With Murder”. Executive Order is his first Portuguese language film; his mother is from Rio de Janeiro, and he is fluent in Portuguese.

Capitu (Taís Araujo)
Got her start on the theater stage and crossed over to become a popular actresses in Brazil and other Portuguese speaking countries. Taís accomplished many first in Brazil starting in 1997, when she was the first black actress to take a leading role in a Brazilian soap opera called Xica da Silva and later becoming the first black TV host and named women's advocate for UN Brazil.

André (Seu Jorge)
An award winning singer and actor, who has won three Latin Grammy awards. He also won best actor for the feature “Marighella” at the Bari International Film Festival, in Italy. He became known to the world in the 2005  film by Wes Anderson “The Aquatic Life of Steve Zissou”. He has recorded more than 15 albums and has appeared in several films, Cidade de Deus, Tropa Elite 2 and Pelé. On TV, he has acted in the American series “Sleepwalkers” and in the Brazilian miniseries “Os Normais”, “Mandrake” and “Brasil, Brasil”.

Ramos’ process for working with actors is “not only in film but also in theater plays I make them have an opinion before everything happens, even before they study the script. I try to promote debates on the subjects it’ll be about so they get passionate for it and defend their points of view. I worked in partnership with two people in particular: one of them is a theater actress called Tatiana Tibúrcio and Flávia Lacerda, theater and TV director, that were beside me throughout the process of rehearsal where we brought provocative exercises for the actors. We’d never closed the process though, so the actors could have the freedom when on set to live the moment.”