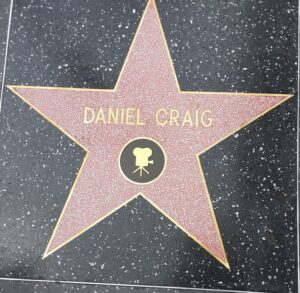 Daniel Craig was honored by the Hollywood Chamber of Commerce with the 2,704th star on Hollywood Walk of Fame in th Motion Picture category on Wednesday, October 6, 2021. The star is located at 7007 Hollywood Boulevard

Nicole Mihalka, Chair of the Hollywood Chamber of Commerce was the day's emcee and helping her to celebrate Craig was film producers Barbara Broccoli, p.g.a, Michael Gl. Wilson and Academy Award winner, actor Rami Malekm, who won for his role as Freddie Mercury in Bohemian Rhapsody in 2018.

Daniel Craig has starred in five James Bond films; Casino Royale, Quantum of Solace, Skyfall, Spectre and the new release, No Time To Die that is now in theaters.