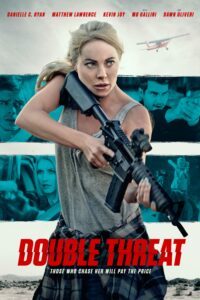 After skimming money from the mob, a beautiful, well-trained fighter, Natasha, finds herself on the run with a kind, naïve accountant Jimmy, whose life is about to get more thrilling than he could ever imagine.

Jimmy (Matthew Lawrence) recently loses his brother and promises to scatter his ashes in the ocean. His plans, however, are derailed when a normal convenience store pit-stop becomes a mob attack on cashier Natasha (Danielle C. Ryan). As Jimmy tries to flee, he discovers Natasha hiding in the back seat, and learns that she isn't some random cashier, but a woman on the run from the mob with a split personality: Nat and Tasha. After some convincing, Nat and Tasha tag along with Jimmy on a road trip across the country, hoping to escape on a boat to Hawaii. But when the son of the crime boss, Ellis (Kevin Joy), joins forces with right-hand mobster Ask (Dawn Olivieri), an explosive and violent cross-country chase pursues.