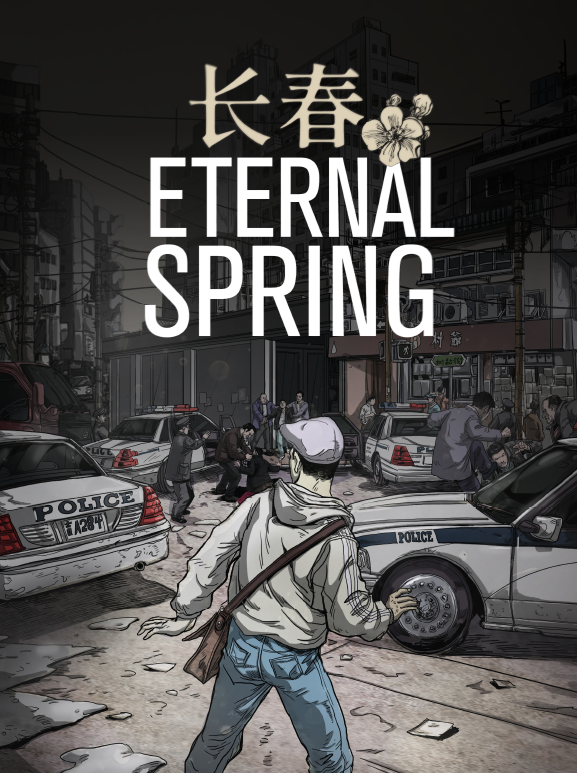 Confronted with government denunciations and human rights violations against their spiritual practice, a group of Chinese activists executes a bold and perilous plan to hack into state television.

In March 2002, a state TV signal in China is hijacked by members of banned spiritual group Falun Gong. Their goal is to counter the government narrative about their practice.

In the aftermath, police raids sweep Changchun City, and comic book illustrator Daxiong (Justice League, Star Wars), a Falun Gong practitioner, is forced to flee. He arrives in North America, blaming the hijacking for worsening a violent repression. But his views are challenged when he meets the lone surviving participant to have escaped China, now living in Seoul, South Korea.

Combining present-day footage with 3D animation inspired by Daxiong’s art, Eternal Spring retraces the event on its 20th anniversary, and brings to life an unprecedented story of defiance, harrowing eyewitness accounts of persecution, and an exhilarating tale of determination to speak up for political and religious freedoms, no matter the cost.

Where to follow the film and it's journey: www.eternalspringfilm.com “Eternal Spring (長春 )” offers a heart-pounding heist based in the need for survival and social activism addressing human rights violations. By combining present-day footage with 3D animation inspired by comic book illustrator Daxiong (Justice League, Star Wars) art, “Eternal Spring (長春 )”  retraces this extraordinary real life event of the takeover of a Chinese TV station on its 20th anniversary, bringing to life an unprecedented story of defiance, harrowing eyewitness accounts of persecution, and an exhilarating tale of determination to speak up for political and religious freedoms. When we stand against injustice and speak up no matter the cost, we will affect the change we want to see in the world.

“Eternal Spring (長春)” is a multiple award winner, having won the Hot Docs Audience Award for best film and the Rogers Audience Award for best Canadian film, among many others (truly they'd won at nearly every international film festival where they have screened to sold-out crowds).   This extraordinary harmony of animation & documentary has been awarded and acclaimed across Europe in its Film Festival run thus far for its groundbreaking animation – and of particular note, has been its incredible comic-book-style animation that transports the viewer into the brave and heroic world of a group of Falun Gong practitioners. “Eternal Spring (長春)” with its story of survival at all costs & battle for human rights continues to draw powerful comparisons to beloved Oscar nominee “Flee.”